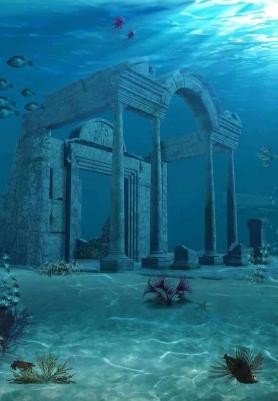 Atlantis (Ancient Greek: Ἀτλαντὶς νῆσος, “island of Atlas”) is a fictional island mentioned in an allegory on the hubris of nations in Plato’s works Timaeus and Critias, where it represents the antagonist naval power that besieges “Ancient Athens”, the pseudo-historic embodiment of Plato’s ideal state in The Republic. In the story, Athens repels the Atlantean attack unlike any other nation of the known world, supposedly bearing witness to the superiority of Plato’s concept of a state. The story concludes with Atlantis falling out of favor with the deities and submerging into the Atlantic Ocean.

Despite its minor importance in Plato’s work, the Atlantis story has had a considerable impact on literature. The allegorical aspect of Atlantis was taken up in utopian works of several Renaissance writers, such as Francis Bacon’s New Atlantis and Thomas More’s Utopia. On the other hand, nineteenth-century amateur scholars misinterpreted Plato’s narrative as historical tradition, most famously Ignatius L. Donnelly in his Atlantis: The Antediluvian World. Plato’s vague indications of the time of the events—more than 9,000 years before his time —and the alleged location of Atlantis—”beyond the Pillars of Hercules”—has led to much pseudoscientific speculation. As a consequence, Atlantis has become a byword for any and all supposed advanced prehistoric lost civilizations and continues to inspire contemporary fiction, from comic books to films.

While present-day philologists and classicists agree on the story’s fictional character, there is still debate on what served as its inspiration. As for instance with the story of Gyges,  Plato is known to have freely borrowed some of his allegories and metaphors from older traditions. This led a number of scholars to investigate possible inspiration of Atlantis from Egyptian records of the Thera eruption, the Sea Peoples invasion, or the Trojan War. Others have rejected this chain of tradition as implausible and insist that Plato created an entirely fictional account, drawing loose inspiration from contemporary events such as the failed Athenian invasion of Sicily in 415–413 BC or the destruction of Helike in 373 BC.

Be the first to review “Story of Atlantis” Cancel reply